Botulinum toxin (BTX), is produced by spores of the bacteria Clostridium botulinum.

The most common ‘Brand’ and best known name of botulinum toxin is Botox which is made by Allergan.

The toxin binds to receptors found in skeletal muscle, nerve endings, the brain and some smooth muscle, (involuntary muscles found in places such as the bladder). When it binds, the toxin prevents the release of a neurotransmitter chemical called acetylcholine.

By preventing the nerves from sending signals to the muscle to contract, BTX paralyzes muscles for a few months at a time.

BTX can also be used to treat migraines and headaches that are resistant to other treatment, as well as uncontrollable blinking, neck spasms and overactive sweat glands called hyperhidrosis. 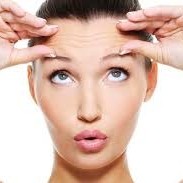 How was it discovered for Aesthetic or Cosmetic Treatments?

Initially, doctors used BTX to treat the imbalance in eye muscle strength that causes cross-eyes, or strabismus, and spasms in the throat. But ear, nose and throat doctors in the 1990s who were treating spasms in the larynx noticed that the drug also smoothed patients’ wrinkles!

Word spread, and plastic surgeons began offering the treatment for wrinkle reduction, even though at the time, the Food and Drug Administration (FDA) hadn’t approved Botox for this use (Allergan brand of Botox).

In 2002, however, the FDA did approve Botox for the temporary improvement of “glabellar frown lines,” the lines that form just above the nose when people furrow their brows.

In recent years, the drugs Xeomin, bocoture and Dysport, Azzalure which are made from different forms of the botulinum protein but work using the same principle, came on to the market.

When people make facial expressions, the 50 pairs of muscles that hook into the skin of the face contract and bend the skin, causing folding at the weakest areas.

Over time, skin loses the collagen that makes it elastic, and permanent grooves can form in those areas, causing frown or crows feet lines, for example.

But because BTX temporarily paralyzes all types of skeletal muscle (and some smooth muscle), doctors also use the compound to treat many types of spasmodic muscle disorders, such as eye twitches or involuntary neck spasms and also later found the drug can help people who have overactive bladders, which cause the feeling of “always needing to go.”

The FDA has approved Botox injections for the reduction of migraine pain, but wasn’t much good in relieving pain from tension headaches so its still not clear exactly why Botox works for migraines and further research is being done.

Botox significantly improves excessive sweating from the underarms, and the medicine is also used for sweaty palms and feet. The treatment works against sweating by blocking the signals sent by nerves to the sweat glands. 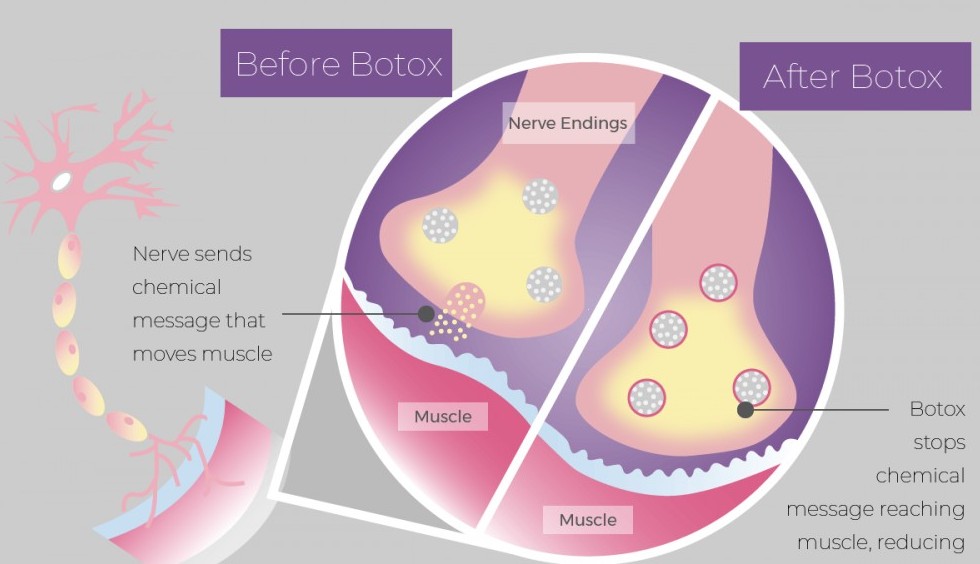 Botox takes three to four hours to bind to acetylcholine receptors and effects wear off by up to 16 weeks, so treatments need to be done every three to six months, this is likely because the body is able to break down the toxin and re-establish nerve transmission.

Botox can cause pain, swelling and bruising at the injection site. Areas with more blood vessels, such as the crow’s feet around the eyes, have a higher risk of bruising.

If the injection is placed improperly or with the wrong dosing, Botox can migrate through blood vessels to other locations and cause crooked facial expressions, including a lopsided smile or droopy eyelids.

Because it takes a few hours for Botox to bind to acetylcholine receptors, doing activities that raise blood pressure and circulation could increase swelling or the chance that Botox will migrate to an unwanted area, which is why its better to rest after a treatment.

Because Botox treatment wears off after a few months anyway, any side effects do resolve.

Only about 2 percent of Botox treatments in the face lead to droopy eyelids and this is usually due to misplacement by inexperienced or non medical practitioners.

Very rarely, the drug can cause life-threatening side effects, including allergic reactions the more severe being anaphylaxis. The bacterium can also sometimes travel to other parts of the body, where it can cause muscle weakness, vision problems, or trouble swallowing and breathing.

And in a small percentage of the population, Botox simply won’t work. Some of these people were exposed in the past to the real botulinum toxin, so their immune systems produce antibodies that bind to the protein. Some antibiotics can also prevent the medicine from working.

People who have Botox injections may also have trouble making the full range of facial expressions. In his book, “The Face of Emotion: How Botox Affects Our Moods and Relationships” (Palgrave MacMillan, 2013), Eric Finzi argues that people’s feeling of an emotion, such as anger, sadness or happiness, may be triggered by the facial expression associated with that emotion. As a result, Botox may dampen people’s abilities to feel emotion by constraining their facial expressions.

That could be a good thing when it comes to depression as some recent studies are finding that people suffering from major depression who received a Botox injection to the frown lines showed a dramatic improvement in their symptoms.

How does Botulinum Toxin Work?
Tagged on: how botox works